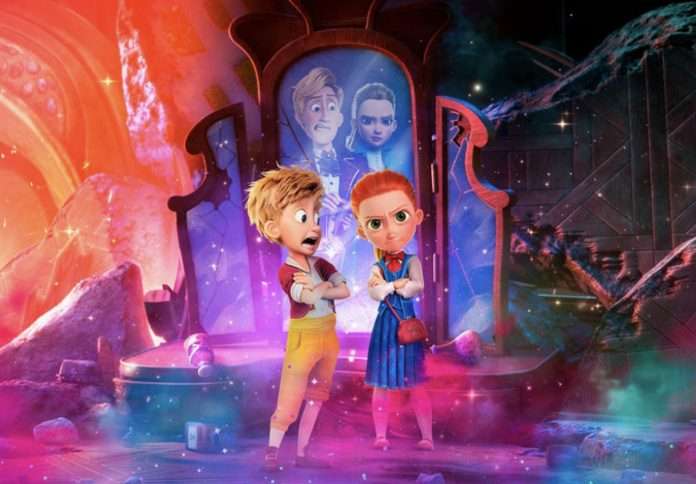 Sure, the world has seen numbers of prequels and sequels of the Brothers Grimms fairy tale, Hansel and Gretel. From Hollywood’s dark-themed movies up to various children’s animated films, now CTB Film Company, Wizart Animation, and QED International joining forces have the latest animated sequel to it. It was first released in Russia but became more mainstreamed after its release on Netflix a week later.

Secret Magic Control Agency is an animated fantasy-comedy adventure of the now-adult siblings’ Hansel and Gretel. Its run time of 1 hour and 45 minutes has no dull moments and would surely keep your children and even the young-at-heart entertained and thrust into any gadget the movie is being played. It attracted a wide range of audiences for its very festive features embeds in its animation. Its narration has a Shrek-like quality to it, as viewers are prompted on an adventure packed with vibrant and colorful sets loaded with fan-favorite fantasy creatures such as mermaids and witches. Moreover, many of the jokes and the obvious exposition in dialogue target younger audiences, causing the work less entertaining for older animated film fans. Having said that, the art and visuals are pleasant and have a Pixar-like finish. Likewise, the character voice work throughout much of the film catches the viewer’s attention. It’s cocky, over-the-top, and all-around comedy gold. Even with its simple plot, the film is full of fun and graphics that any animated film fan will enjoy.

So, if you are looking for a movie to watch with your kids (especially those siblings who do not have a strong bond), this one is probably recommended. But before watching, make sure that you already have a background of the original fairy tale for you to understand the references built-in once in a while in the movie.

With some details referenced from the original Brothers Grimms fairy tale, the story begins by introducing an Adult version of Gretel who works for the titular agency, which is similar to the Men in Black but only for magicians and wizards. She’s a top performer, almost lickspittle exceptional agent with a verging obsessional dedication to the state, but she’s as perplexed as everyone else when a king of the ill-defined but universalist “Kingdom” has been abducted by a vicious spaghetti man brought to life by dark magic. With nobody else to turn, the agency’s director Agent Stepmother incorporates the assistance of Gretel’s estranged brother Hansel, a professional con artist that makes a pretty good living feigning magical abilities for gullible audiences and has prior experience making people and objects vanish without some kind of trace – even if he recovers them later.

Generally, the siblings don’t get along – Gretel still hasn’t spared her brother for dishonoring their parents’ heroic principles (she has no idea that he devotes his profits on trying to help the poor and in need with “magical coins” which are just cold money). She’s horrified with what she believes in, that, he’s mainly a slob conman because she’s so knocked upon the idea that she’s accomplished things with her sheer determination and persistence.

The significant plot twist, however, is that shortly on in their unwilling collaboration, Hansel and Gretel are morphed into their childhood selves, complicating their mission because no one acknowledges them or treats them seriously. Would they still be able to accomplish their mission? The answer is yes, but it is now up to you to unravel the colorful-packed adventure of the siblings from going to Baba Yaga (the witch), the world of the mermaids, among others.

‘Secret Magic Control Agency’ is a kind of three-dimensional computer-animated family fantasy movie released in 2021 in English and Russian medium. Wizart animation studio and CTB film company are responsible for the film’s production. Directed by Tsitsilin, the film was first released on March 18, 2021, exclusively in

Russia through Sony Pictures and eventually after a week acquired by and streamed on Netflix.

It is obvious that it lacks the generous finances as compared to that of a Pixar production, as well as the years of intricate, proven to work experience, say, the Studio Ghibli production. However, having that said, interestingly, the animation quality turned out to be just slightly less than that of Disney, with vibrant, eye-popping settings, colorful set-pieces, and jaw-dropping wide shots all contributing to the creation of a world filled with aesthetics.

Furthermore, it is a Russian-made animated film that has been interpreted into English with voice acting and playwriting that show a few inconsistencies from its overall productions, but for a Netflix release that avoids movie theaters, it performs better than the vast majority of other relatively inexpensive, flat to VOD options – especially in the animation studio.

The characters are all well-designed and interesting; the adorable design elements of things like the glaring Minion head cupcakes or the super cute cookie doggie would surely make you smile from corner to corner. Overall, despite appearing to be on the lower end of the animation production, ‘Secret Magic Control Agency’ is incredibly impressive, displaying sheer technical skill in every single sequence.

This film should be best described as ENJOYABLE. There’s nothing spectacular, but it has a predefined charm to it. The movie was made on a certain allure that was not fully fleshed out, but sure, it was heading in the right direction. As a result, one would have a good time watching it with the whole family.

The film is visually appealing and amusing. It also conveys positive thoughts about the importance of reconciliation, teamwork, and the significance of family relations.

Its overall animation is competent enough as compared to those inexpensive films produced alongside its tier. The designs and the visuals looked smooth and are radiant that is eye-catching for the younger audience. It combines delightful ambiance and characters from a fairy tale with action sequences from a spy thriller film.

As Wizart Animation is premised in Europe, there were some concerns with the dubbing, but they did complement for the most part. The voice actors do well and deserve credit for bringing each character to life

The plotting did jump over a little smidge. Hansel and Gretel travel from a certain place to another certain place in search of signs of the king’s whereabouts. They go to a lake, mermaid territory, or even into the woods. Perhaps the Wizard is laying the groundwork for sequels by illustrating a new world. Having said that, they did an excellent job with Hansel and Gretel’s sibling rivalry and the overall story.

Overall, the film may have a few confusing points in its plot, but it should never be discounted for the entertainment value it offers a household. More than its easy access to watch on Netflix, the greatest takeaway from the movie would certainly be its golden thoughts and lessons.

FORGIVENESS. Forgiving someone is always easier said than done. You would only do such a thing genuinely if you have already grasped the whole situation in both of your point-of-view and from the person with whom you had a falling out. ‘Secret Magic Control Agency’ proves that it is not time that heals the wound but it is through communicating and understanding each of the sides of both parties involve. Gretel did not know that Hansel is not betraying the honor and principles in life their parents instilled them, he is a con-artist by profession but uses the funds he earns in helping the less fortunate. Indeed, through acceptance, you would not only forgive the person you had falling out with but more importantly, you would be able to give yourself the healing and peace it immensely deserves.

NO MAN IS AN ISLAND. The film once again proved that two minds working together are always better than one. No matter how capable you think you are, only you could do greater things with the help of someone; at least in the case of Hansel and Gretel. The Kingdom was almost taken over by Ilvira after Gretel tried to do the task all by herself and take Hansel out of the picture due to her grudge over him. Only with the help of the latter as he put magical traces back to the kingdom and distracted the royal guards through his natural talent of deceiving, they were able to save the King and consequently the whole monarchy and the kingdom. Putting your trust in someone could be a risk, but without risk, no one could be able to reach triumph.

SIGNIFICANCE OF FAMILY RELATIONS. It is no longer true enough that we cannot choose our family. We can now and even before. We just neglected the essential definition of which—family is the persons who make you feel you’re always home and are not necessarily those with who we share the same blood. Hansel and Gretel proved that after their reconciliation though they are biological siblings. After their mission, Hansel thought that their ties are once again disconnected from each other so he just decided to go back to his old ways in life as a con artist. But for sure, Gretel was hit by the thought of how important family is among other things including our success. It would only taste fruitful if we have our loved ones to share it with.

Secret Magic Control Agency is a great option for family movie night from Netflix, which continues to deliver excellent family video content. It’s ideal for young viewers and one which parents probably wouldn’t mind watching as well. With some parental guidance to the young viewers on some of the aspects of the film including violence, nothing should be worried about. While watching, parents could also discuss the lessons with their children and let them realize the value of forgiveness, cooperation, and family ties. Grab some popcorn now or any snack within your reach and unravel the story filled with vibrant animations and a high-end overall production.

“Next Gen” Review: An Engaging and Futuristic Film About Humans, Robots, and Friendship.

Best movies for the family this summer

Performances At The Theatres, 2019

The Willoughbys Review: A unique and whimsical dark-themed movie about love...