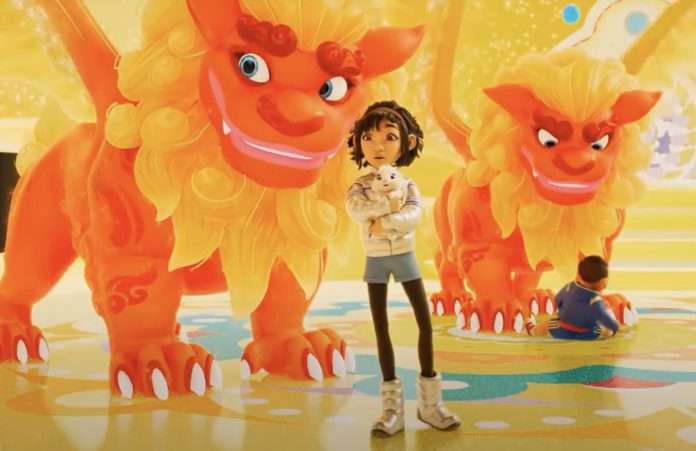 Life to be considered as one needs not only fun and love but as well as pain and all sorts of emotions on the other side of the spectrum, and all of these had been given by Netflix’s “Over the Moon.”

It would be great if at young age children already have the understanding that life is not stories of unicorns and prince charming. It is not a way of shattering their dreams, but rather a way of teaching them. They must learn that in life they would experience pain, suffering, love, hope; that they would learn and feel all kinds of emotions.

Children may not want pain, but it is essential for self-growth and development, and this film offers that experience.  So, if you want your child to be immersed in the reality of life but in a way that is light, animated, and suited for their age, then this movie is what you are looking for. “Over the moon” has just the correct recipe, the correct amount of “spice” to stir things up and embed that reality in the hearts and minds of every child. This movie would surely be memorable to your kids and your family as it would be able to make you smile; while driving you into tears and realizations. So aside from a bowl of popcorn, be sure to prepare and have that mini-tiny box of tissue.

​“Over the moon” is a story that revolves around the life and “adventure” of a young girl named Fei Fei. She has a happy life, a small but simple family, a thriving mooncake business, and a pet rabbit named Bungee. With her parents always at her side, she grew watching their tradition-rich business and listening to the mythical story of the Moon Goddess that no matter how many times she heard, she still loves listening to the tragic story of Chang’e. Everything seemed fine and perfect but life is a “killjoy”, Fei Fei’s mother died.  She is not yet ready to let go and move on but the people around her are. Fueled by her longing for her deceased mother, a new mum who is about to enter her life, and the drive to prove something to her Baba (Chinese word for father), she built her rocket and reached the lunar surface to meet the Moon Goddess, Change. Now on the moon, Fei Fei came to realized that it was different from how she and her mother perceived it to be. She came to realized that time changed Chang’e. Now together with her company from Earth and her newfound friend in Lunaria (the “city” in the moon), she must find the gift that Chang’e wants so she can go back home and bring the proof that the mythical Moon Goddess is indeed true.

​Netflix’s “Over the moon” must be the most “Disney-ish” non-Disney movie out there. It is not an exaggeration to say that animated films with all the singing, the dancing, the mythical characteristics, the talking animal sidekick, and scenes full of emotions that were enhanced by melodramatic and ballad pieces (in short animated musical films) are the brand of the Walt Disney. “Over the Moon” has all these characteristics, and yet it is not a Walt Disney film. Nonetheless, it wouldn’t be surprising if one may see it as one.

​People may see “Over the moon” as that of Walt Disney rather than of Netflix and I couldn’t blame them at all after all the faces behind who led it are both previously associated with the Mouse House.  The film was directed by two Disney personalities, Glen Keane and John Kahrs, Keane had been an animator to Disney films such as Alladin, Pocahontas, The Little Mermaid, and Beauty and the Beast among others. On the other hand, Kahrs animated Disney films such as Frozen, and Bolt. He also served as an animation supervisor for the movie Tangled.

​But is the resemblance really that important? I would leave the answer to you. But the film, the story is original on its own. The artistic, creative, and graphical qualities might be inspired by other things, but, beyond that “Over the Moon” has its own story to tell, to share. It has a story worth watching and listening to, a story that would surely leave everyone in admiration. It has its own identity and emotional punch that is sure to leave lessons and realization to every kid’s heart, to every kid’s mind.

​“Over the moon” is a film that would treat you to a tour you have never experienced before. This kind of film is the one which will capture the eyes and interest of children, and they would not regret it. The graphics and animations are superb; everything was so good that one would feel that they are part of the actual film. It is undeniably a visually pleasing and “aweing” film. The design of the sets, the costumes, the landscapes, the effects are undoubtedly first-rate. Children will surely love the vivid colors of the characters, especially those on the moon, the magic-inspired city of Lunaria, and the rocket experiments.

The animations, visuals, and graphics of the film strengthened the emotional resonance of the scenes. This strengthened resonance is evident in fun parts, like when Chang’e emerged like a pop diva and started singing “Ultraluminary”-everything was just a bang! The colors, the swag, the actions, the vibe, everything feels just like a concert. This part, though unexpected, is a total delight, and it would really surprise kids as it is different from the prior tempo of the film. This is a break from the preceding emotional parts is really great as it would somewhat change the overall appraisal of the movie. It would change their perspectives-that it is not all sadness and longing. Moreover, this part is the start of hyperactivity. If at the start children may still have some reservations and think that the movie would be boring then this part would turn it all 180 degrees as their eyes would be glued starting from this scene.

Honestly, Chang’e being a diva, and the pop style concert is somewhat like Pixar, and the setting (Lunaria) looks like those in Disney, but who cares? “Over the moon” gives a new feel. If someone would say that it is Pixar-ish and Disney-esque, then better see it as an example of how an animated film would look like if the two collaborate.

Regardless of its resemblance, the movie is still original on its own. After watching the film, one could not deny that the emotional jabs of the film are so solid that one would feel it. May it be sadness, grief, hopelessness, joy, or the party vibe-everything is just resonating from within that it would totally affect those who watch it; kids would feel and somewhat be able to empathize with what the characters are feeling. The musical numbers further magnified these emotions.

It is noteworthy to share that this film features some of the greatest songs I’ve ever heard. This feature is another strength of the movie as its songs became a language. The characters do not explicitly say the words that convey the emotions. The emotions are in their actions, in their expressions, in their songs. The emotions of the characters are very felt as they sing the songs which have lyrics that are very emotional and melodies that reflect their dispositions.  Furthermore, the atmosphere while the characters sing made everything perfect.

In this film, the song themselves are communicating. It feels like they have their own life as people could not do anything but appreciate it. The heart feels this language that is why it entices the emotions towards the songs. The mind also answers with it, as one could not stop to think about the subjects of the songs neither stop reminiscing things that could be associated with the feelings.

The Chinese setting vibe of the film is likewise a good move and beneficial, especially for those children with different backgrounds- because this movie would introduce them to a culture different from theirs. It provides knowledge about the Chinese culture like the Myth of Chang’e, the close-knitted family relations in their society, the symbolism and meaning of things like that of the circle in the mooncake that symbolizes family.

Story-wise, “Over the moon” has a not hard-to-follow storyline that revolves around a universal theme. Is it bad? No, it isn’t bad. This film is intended for kids thus, an overly complicated plot would not suit well in the delivery of the overall message. So, by considering this, the film was able to provide an experience that has a serious message through a light yet resonating way.

These factors resulted in a film that can connect and engage the viewers. It throws punches, and the viewers would not be able to dodge these-more of them not dodging these because they cannot, they are just hooked and captivated that they will openly receive these emotional and creative jabs and blows.

“Over the moon” teaches a lesson that is simple yet hard. It teaches that everything would come to an end, and there is a pain associated with it. One could not escape pain; it is part of life; it makes us human. At some point, the people we love would leave, and we cannot do something about it. It is inevitable. Just like the message of one of its songs entitled “Wonderful,” what we can do with the past is to let it go, reminisce the memories and the feelings, but at the same time move on. People could only grow if they learned that letting go does not mean forgetting. Letting go means being open to new things while at the same time holding on with the memories one has and not letting these memories dictate everything in the present.

​All in all, “Over the moon” is a must-watch. The whole family would it, the kids would love the animations, the songs, the dances while those who are older would love the message of it. It is a movie that would definitely make you hug and kiss your loved one after watching it.

Performances At The Theatres, 2019