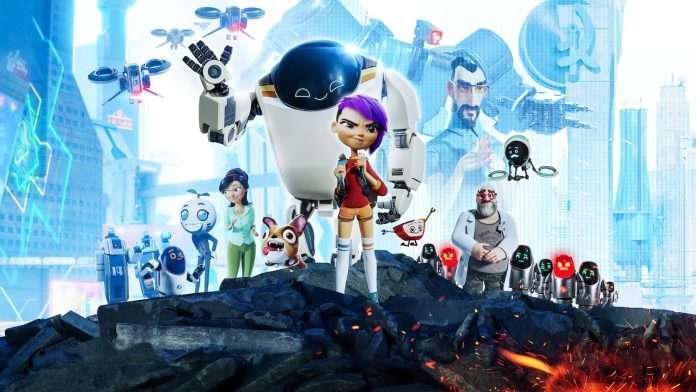 If you, your kids, or your family want to see a film that shows emotions that are bound to reality, a main character with whom you’ll get angry with, an apocalyptic movie that depicts robot invasion, a plot that shows social issues, or a talking pet, then this film about “a broken girl” and a “broken robot” is a great fit for you.

Next Gen is a fun-filled action-packed movie with sorts of drama on some parts. It shows a crossover between the hi-tech society of a futuristic world and the very humane characteristic of humans, emotions. The technological development of today is accelerating at a record phase and it is not impossible that decades from now humans will have autonomous robots that can support them which will make humans more dependent than ever on these technologies. Despite these developments, humans will not be able to detach themselves from their emotions and this is what the film shows, that humans despite the technological advancement are still humans, robots may assist people but the companionship, love, and friendship from living beings is still the best.

Next Gen is a movie that tackles a rather sensitive and often undepicted human emotion in children’s film, being rebellious. The phase of being rebellious among children comes at a certain part of human development in young adults for them to develop an identity and self-independence away from that of their parents or guardians. This phase is a commonplace aspect that could be driven by their desire to decide for their own or by other underlying factors. In this phase, they may experiment on different roles, behaviors, and identity, for them to know and grasp who they are or who they want them to be. And this is one of the core ideas in the movie Next Gen.

The movie shows a naturally occurring aspect of human development, it is somewhat violent, but with proper guidance and explanation, this film may become a great resource of lessons for children. Life is not just about happiness, human have emotions, the word has an s because humans have many different and varying emotions such as pain, sadness, anger, disgust, and many more. It is natural to feel these emotions but it does not mean normalizing violence, through this film children and parents will see what drives this kind of behavior and therefore would provide snapshots on how to avoid it.

So, if you want your kids to learn more about an aspect of human behavior while enjoying a film then you better grab and give some snacks to them because this is totally what you are looking for. And if you are ready for a lot of explanation, and adrenaline rush for some actions, with some drama thrown to the mix then together with your family, sit, watch, and enjoy Next Gen, the story of a “broken girl” and a “broken robot”.

Next Gen tells the story of Mai Su, a lonely rebellious teenage girl who lives with her mother Molly in Grainland. In their world, sentient and hi-tech robot technology is natural, mainstream, and ordinary. These technologies are the new go-to-get of people including her mother who turned to robots for companionship after her father left them. Her mother due to an extreme fondness for robots went to a product launch of a robotics company named IQ Robotics, and as such Mai have no choice but to go with her mother. In a sudden twist of fate, Mai met 7723, a robot who will play a big and important role in Mai’s life. 7723 is one of the most hi-tech robots ever created, but unlike other robots, 7723 was designed for a different purpose. Robot 7723 is a top-secret weaponized creation whose goal is different from the others. The encounter between the two formed an unlikely bond that they must use to stop a vicious threat from an evil robot who plans to wipe out all of humanity.

If you want to “taste” a new brand of animated movie with the same qualities as those of Pixar then Next Gen is the one that might turn you on. There is no doubt that Pixar and Disney are the leading figures or the pioneers when it comes to animated movies but other actors are slowly catching up and Next Gen is one of the many proofs of this ongoing trend.

Next Gen is a computer-animated sci-fi film based on an online Chinese comic of Wang Nima, 7723. This 2018 movie is on par with recent blockbuster animated films which is a great milestone considering that it was produced almost exclusively using Blender which is a free software developed in the Netherlands that is being financed by different companies and people all over the world. Despite its lower budget of 30 million dollars compared to the estimated budget of other animated films such as Toy Story 3, Finding Dory, Monsters University (around 200 million dollars), Wall-E (around 180 million dollars), Big Hero 6 (around 165 million dollars), etc., Next Gen is not short of being amazing, first-rate, and top-notched in terms of animation, visual effects, and cinematography.

A movie that is highly delightful and imaginative, that is what Next Gen is. Next Gen offers something different in the animated film industry as it attacked some aspects differently. For once, the music used in the movie is somewhat rock and metal (which is in sync with the character of the protagonist). And this is somewhat new, a break away from those mellow, princess-like songs (though it still has some ballad). In addition, this movie boasts an animation that is on par with Disney and Pixar. Animation wise the movie is excellent, its quality is incredibly made from the colors, background, character design, and the fluid motion of thingsthough sometimes it appears to be overstuffed.

Next Gen, therefore, is a movie that has what it takes to be a big hit, but same with other movies with a promising start it was not able to reach what it was supposed to reach. But this does not mean that Next Gen is poorly made because it was not definitely, it is just that it offers something somewhat familiar and yet different. The familiarity comes with its resemblance with Big Hero 6 from the setting, character proportion, the atmosphere of a bubbly cheerful character. But is this resemblance bad? No, this resemblance is not bad, sure, it has drawbacks but it enabled the movie to establish a context that became the launchpad for its story.

The story of Next Gen is not that original too, for once, the apocalyptic scenario of robot domination is not new, but Next Gen was able to add a new flavor to it in terms of background and storytelling. What was great with Next Gen is that it told the story from the perspective of the lead character, Mai, and thus there is more connection because it shows how a kid feels from the perspective of a kid. It is also commendable that it tackled the story of teenage rebellion and the underlying factors behind it. It was very seldom for animated films to portray these stories because of the associated violence (thus parents should be with their child when watching this so that they could explain it). The story likewise touched a social issue and that is a big plus point, it showed the over-reliance of humans on technology that somewhat disconnect them from those people who are close and significant to their lives.

Another strong point of it is that it ended with a happy ending but not the happy ending expected from typical animated films (the dad did not show up, the world was saved, the robot lost its memories), and this is a good point because in a sense this is anchored to reality. Things do not always end the way people wanted them to be, things sometimes end up as happy but not the version of happiness people want, nevertheless, it’s a happy ending.

The events that transcend in the movie are indeed action-packed, the events have punch and the somewhat serious issue was balanced out by the comedic relief provided by some comedic parts like when Mai fought her toothbrush and whenever the dog speaks (the dog is fond of swearing though the words were masked by a beep still be sure to explain it).

The voice actors also made a great contribution in the movie, the script is lacking in some parts but through the voice actors, the movie was able to pull it off. And thus, the end product of all of these was a somewhat magnificent movie that was able to turn a simple story into a fun-filled, and quite emotional one. It was able to “innovate”, capitalize, and manipulate the story, putting its own charm on the process. The film might come as something that has no “identity” as it tried to be like a lot of films, but in the end, if seen in a bigger picture, Next Gen was able to prove that it has its own brand.

Next Gen is not only about animation and story, it is also about morals. The violence is given (that is why you should be with your kids while watching this), but it should not discredit the values that are available in the film. Next Gen is a film that depicts the nature of friendship, that it is not only confined to humans, but could also be with pets, and in Next Gen’s world, robots. Thus, pets should be considered as family, as they are always ready to lift the spirit, to support their masters. Another, the film discusses the issue of how technology hinders human relationship (depicted in the relationship between Mai and her mother), the lesson here is that humans should spend quality time with those around them because those people are more important than any technology, and love and care can only be found on them. It likewise tackled love, it showed love as unselfish and courageous emotions that make people sacrifice everything if it would mean the betterment of the person or the people they love.

Next Gen is a great pick for a family movie night as it serves a lot of things, both familiar and new. It has some violent content so parents, guardians, or any older knowledgeable other should be with the children to explain things. But other than the violence, everything is set and great to see and hear including the music, the animation, and the lesson. So, be sure to watch it or else you, your family, and your kids will be missing a wonderful film that offers new things that all of you would surely remember.

“The Mitchells vs The Machines”: A Dysfunctional Family giving Functional Lessons

Best movies for the family this summer