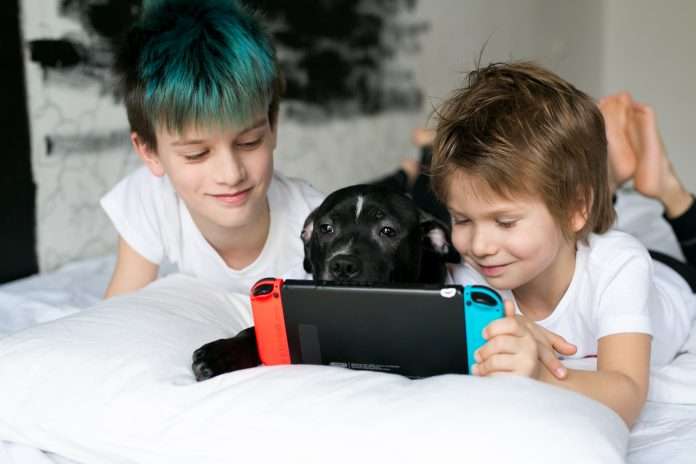 Unlike the past where children are still going out to play real games, nowadays, children are left sitting on the couch, or in front of different electronic devices such as laptops, computers, cellphones, and televisions to watch or play video games. Video games are not things of the past-and these games are about to develop further and attract not only children but also adults. And you can’t blame them. The technological advancements of today made these games more interactive and engaging. Their newer innovations and first-rate graphics and animations will surely develop more, and in the coming years, who knows, maybe video games will no longer be the same as we used to know them. (Learn more about Gadgets and Children)

While it is easy to see video games as unsophisticated or something negative and harmful for children because of the various studies that say so-people forget that these effects are not the entirety of it. While the harms and negative consequences are true to some degree-oftentimes, people forget that these effects will only happen if the children are left doing it for long hours or if it is allowed in excess. The key, therefore, is BALANCE, letting the kids play video games for some time and then compelling them to go out of the screen and play some activities outside. This could be a great start to avoid the negative consequences of it while at the same time harnessing the benefits it has.

Video games are not entirely bad, in fact, they might help children with their development, coordination, language, teamwork, concentration, creativity, and future careers. Here are some of the surprising benefits video games have in store for your children.

Aside from being a great source of entertainment and fun, video games are also a good way to engage readers to read. Studies showed that kids could get a boost with their reading through video games. This boost is due to them reading in-game communications, text instructions, reviews and blogs about the game they are playing, books about it, and fan fiction.

The UK’s National Literacy Trust conducted a study and it was revealed that as high as 35% of respondents surveyed said in the affirmation that video games made them better readers. The same study likewise showed that video games are a great deal to engage those reluctant young people with reading with 73% of the respondents who do not want to read said playing games help them feel part of the story of the game.

Some video games like those set in the 3D worlds require children to navigate the setting of the game. Oftentimes, this navigation is happening without a map or with a map but with very few details and the rest is for the child to discover. This set-up results in children building maps on their heads to navigate the game. And thus, they are unknowingly practicing and honing their Visual-Spatial skills that lead to an improved cognizance of distance and space.

At the core of every game is the challenge associated with it. Most games have a structured leveling system that is arranged by level of difficulty like puzzle games. This set-up gives children complicated problems that require solutions, and children are being trained to do this. Driven by the urge to go to the next level, children are encouraged to work for solutions.

This problem-solving benefit is backed by science, researchers from Rochester University found out that video games, through posing problems that must be solved in a designated time improve children’s troubleshooting ability.

The benefits of video games to children are not only in the thinking aspect as it also posits benefits in other areas such as creativity and the arts. Research conducted by scholars from Michigan State University that involves nearly 500 12-year-old kids showed that the more children played video games the more creative they become on certain tasks such as drawing pictures and writing stories. The same conclusion is supported by another research from the UK’s National Literacy Trust which found out that 63% of young people they surveyed also write about the video games they play.

Several studies showed that video games are also linked to better memory but unlike the other the benefits of video games to this cognitive aspect could not be seen immediately. A study conducted by researchers from Universitat Oberta de Catalunya found out that participants in the study who had earlier experience with video gaming showed better working memory. The lead author of the study, Dr. Marc Palaus, Ph. D., explained that “People who were avid gamers before adolescence, despite no longer playing, performed better with the working memory tasks, which require mentally holding and manipulating information to get a result.”

Video games sometimes task players to build, grow, and strengthen something inside the game. Empires, militaries, or farms need resources to grow, be it wood, stone, money, food, metal ingots, etc. Oftentimes, the growth of these empires, cities, militaries, and farms is challenged by adversaries or other computerised calamities with the player’s resources being looted or robbed. These scenarios compel players to think and decide what supplies and resources should be stocked, what should be spent more cautiously, what could be bought or produced in bulk. These factors lead to players being more aware of the resources that they have.

The resource management experience that players or your kids have is not only applicable inside the game. The skill is likewise transferable, with one study indicating that video games such as simulation games encourage frugal expense of resources. It also helps a child have a better understanding of what it means to manage one’s time and resources such as money.

Playing video games does not only make someone simply think, as it also makes someone strategize.  Over time, the promotion of these two through continuous practice leads to better strategizing. Games that simulate wars, actions, shooting, etc. involve a lot of strategy for a player to win, and your kid by playing these games is being trained to think of efficient and possible ways to defeat an enemy. Most of the time, players, including kids, would experience some “deaths”-but these deaths would be inputs that they would likewise include in the revision of strategies. Over time, their strategies will be so refined that they would be able to defeat their adversaries.

Furthermore, video games involve a lot of factors, and kids who are playing these will be exposed to these factors thus, becoming more used to considering a lot of variables in making a plan of action. This enhanced strategic thinking as a result of playing video games is supported by research. According to a study from the Queen Mary University of London and University College London (UCL), certain video games could help and improve strategic thinking as it promotes the human ability to think quickly and learn from past mistakes.

Video games require players to think-and most of the time this thinking should be quick. This quick pace of having to analyze things and decide based on the results of the analysis work out the brain. And though it may sound tiring and stressful, it does help players like kids to be more decisive and have decisions based on careful analysis of factors.

According to researchers from the University of Rochester, games that stimulate stressful events like those of battle or war and action games could be a valuable tool in training for real-life situations. These games, therefore, provide practice to these skills, which are just like what their study suggested, that these games are priming the human brain to decide and make faster calls. This faster decision-making may sound not that great, but that is contradictory to the importance of this skill, especially in some specific fields.

Your child may become a doctor or a soldier someday. And video games, according to the research, helps these people to better by serving as their practice place for calling decisions in a shorter time. This quick decision-making would come in handy and might save lives and serve a difference if the person who will call them is in the middle of surgery or the middle of a battle.

While it is true that some video games isolate children, there are also video games that let children interact with other gamers. The gaming world is big, and multiplayer video games or online games introduce children to other players thus, making their social networks bigger.

These games serve as a medium for children to interact with their peers, especially at times when they cannot interact with them in person. Video games, therefore, are helping children with socialisation. This conclusion is also supported by research, as a long-term study conducted by Pew Research Center of Internet and Technology found that video games facilitated the creation and maintenance of friendships, with this scenario being especially stronger in boys. The same research revealed that more than half of the teens in the study made new friends online, with a third of that coming from video games.

Video games are not confined to individualistic skills as it also enhances children’s social skills. According to the Institute for the Future (IFTF), a Californian Organization, video games boost children’s teamwork.  Multiplayer games that need teams teach children about the value of cooperation and teamwork, as most of the time, aside from the ability and skills of their avatars, it is the cooperation and teamwork that brings victory to a team. This social skill learned in video games is also transferable, thus, it gives a boost to children’s interaction with their peers, classmates, and playmates in the real world.

Aside from these, video games teach resilience. There would be times where kids will find themselves at a difficult level-and most of the time, they would experience one or even multiple “game over” or “deaths before passing. This scenario may break a kid’s spirit but, they could also make it stronger. The drive to succeed and pass gives children the ability to continue and be better. This kind of attitude is reminiscent of the saying, “Try and try until you succeed.” And children are really doing that; they keep on trying, learning from the past, and doing their best to succeed and pass.

While it is easy to dismiss video games as bad, it should be remembered that things sometimes have two sides. Video games, despite their negative consequences, harbor positive effects that are worthy of consideration. The benefits of video games to children are dependent on the type of video games they are exposed to and the time they are allowed to play. Thus, the acquisition of the benefits it has depends on the supervision children get while playing.

Read more about Kids and Gadgets

What kids should know about cheating

5 easy ways to nurture the imagination of your child